While working for Develop and Promote

While working at Develop and Promote I worked on a lot of different websites for clients, and for the company.

This work included transferring domains to our hosting, setting up development domains, installing and setting up the chosen CMS, and then building the website to the provided design. I would then have to work with the client to get their feedback on the site, and to add the content that they wanted.

The majority of the projects that I worked on were handled solely by myself, but some of the larger projects, such as e-commerce websites were completed as part of a team working on different aspects of the sites.

While working at Develop and Promote I also worked on a number of web applications, primarily for internal use, but also for some external clients.

The first few web applications that I built at Develop and Promote were done primarily by myself, while the most recent systems have been done as part of a team.

These web applications include:

The majority of these apps were created as examples for potential clients to look over, but I did work on a number of mobile apps for clients.

As part of my voluntary work for my brother-in-law’s company, T J Dixon Ltd, I created a web site for Creative Futures Art Therapy using WordPress. Most of the work involved adding the information from a current brochure to the website, but I also created a heading banner and a number of logo ideas.

I made the banner using 3D Studio Max, and I have explained a little bit about how I made it here.

I made these basic logos using Microsoft Word 2003, using ClipArt and WordArt, and then editing them in Adobe Photoshop to change the colours.

As part of my voluntary work for my brother-in-law’s company, T J Dixon Ltd, I created a WordPress theme for the Discoveries Football Club website, based on specifications given by the client.

I started by designing the theme using Adobe Photoshop CS2, in order to work out the basic layout of the site. 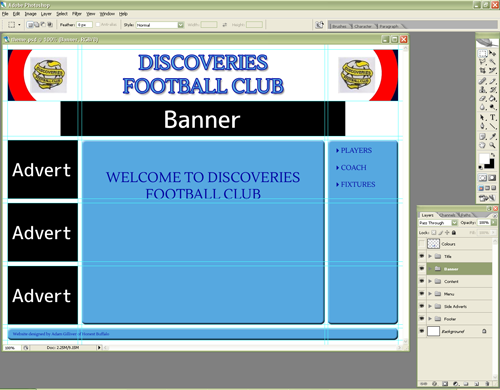 I also redid the logo that was provided by the client, as it was of low quality. Again, I used Adobe Photoshop to do this.

I then used a blank WordPress theme as a starting point and created the theme to match my design. A lot of the work was done using CSS, as the HTML was mostly used to create the DIV areas that I could then style.

As it was part of the specification, I included a sidebar on the left for placing adverts, which currently has place-holder images in it, and a main banner advert space, which also has a place-holder image in it.

I made sure that the adverts and banner could be replaced easily, without having to edit the theme itself, and that the menu sidebar could also be updated easily.

Since creating the original theme for The Discoveries, I have been provided with a design created by one of the people involved with the Football Club. 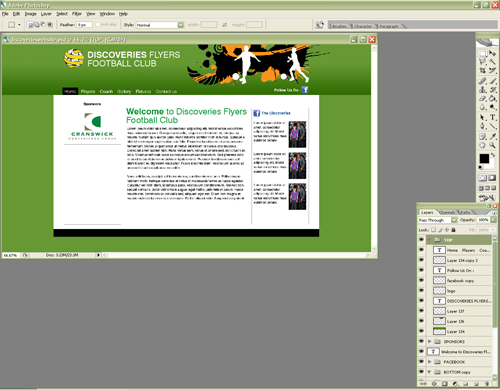 I was asked to implement this new theme, from the provided design, and so I followed a similar course of action as before, starting off with a blank theme, and customising it to match the design.

The design now includes links to the Football Club’s Facebook page, as well as an activity feed shown on the page.

Since creating the theme and building the website for The Discoveries Football Club, I have received new content to add, and updates to make. This has included adding in seperate sections for the two different teams, that are now under the Discoveries Football Club name. I have also implemented drop-down menus for ease of navigation, which are now used on the Players, Management and Fixtures pages. 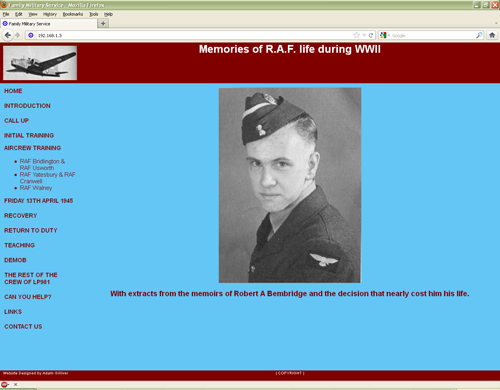 One of the first projects I did when I decided to retrain as a Web Developer was creating a website about what happened to my grandfather during World War 2, he was in a training accident in a Wellington bomber and was one of only two survivors.

I have since updated the website to use HTML5 compliant code, rather than using frames, which I had originally built the website using.

I have included early work-in-progress pictures of the majority of the web pages, in the gallery, which can be accessed here.