As part of my work on the Creative Futures Art Therapy web site, I created a new header banner to use on the WordPress theme. The basic idea behind the banner that I made was that it should look like paint cans, and so be related to Art Therapy.

I made the banner by first creating all of the paint cans as models in 3D Studio Max, I then added a reflective texture to all of the ‘cans’, and changed the colours of the ‘paint’.

I then rendered the scene with the image size of the banner, and adjusted the layout of the ‘paint cans’ so that they fit well into the image, and didn’t leave too much empty space.

As a small project for T J Dixon Ltd, I created the company logo in 3D. This allows the logo to be shown from any angle, so would make it easier to create new logo images, or an animated image. 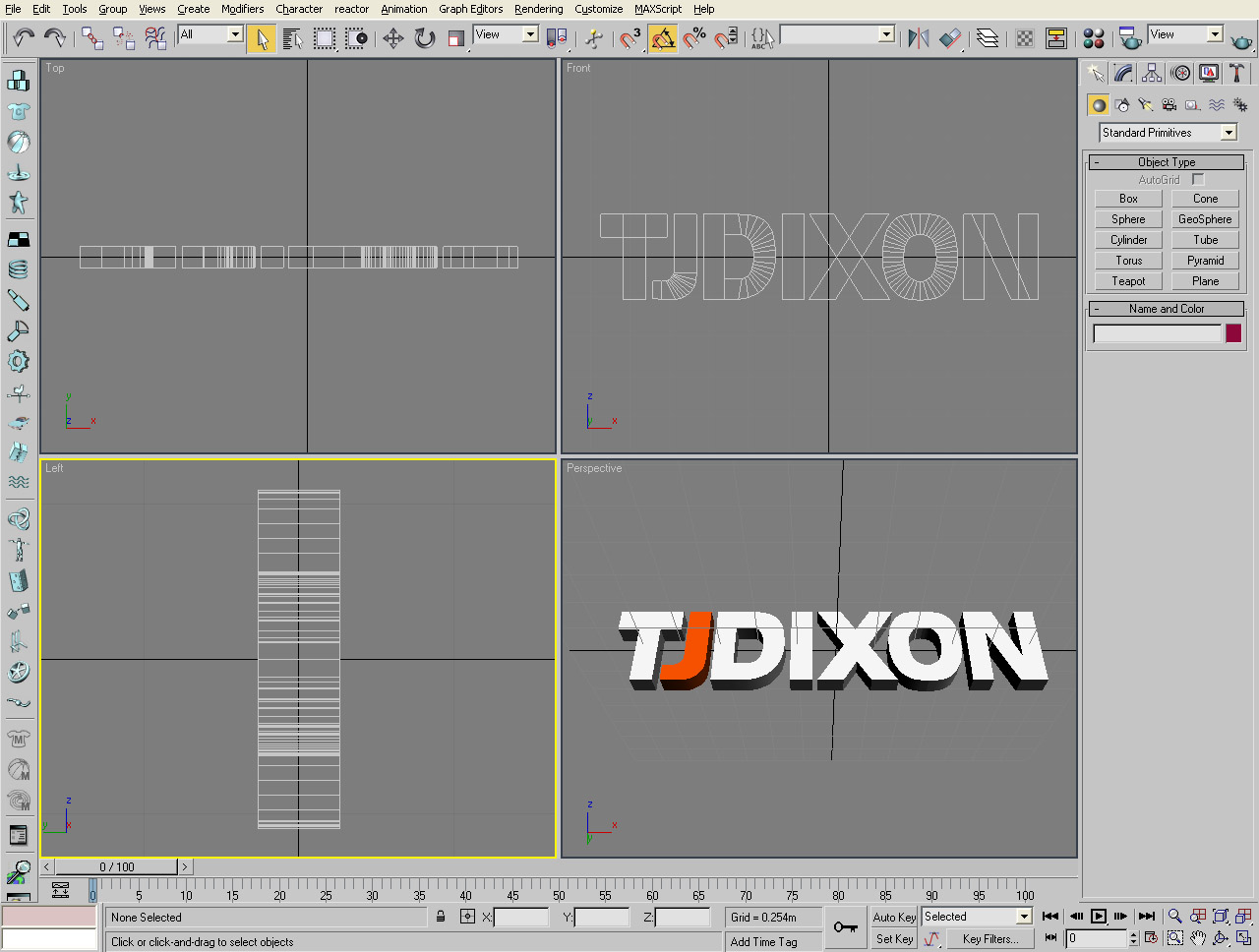 I have included a number of renders of the logo, in the two different colour schemes used by T J Dixon Ltd, which can be seen here.

As another small project for T J Dixon Ltd, I created a 10 second animation, for use at the beginning of a company video. The animation was of my own design, and used an updated version of the previous 3D logo I had made. 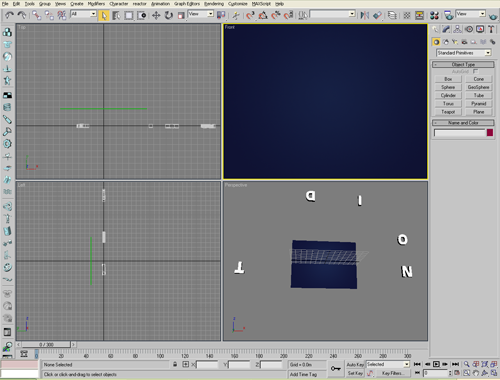 Below is a test rendering I did for the animated logo:

As a way to get some experience, it was suggested to me that I try and create an animated logo for Red Herring Games.

To do this I used their current logo as a template to work from when creating the 3D model, which I could then animate. Once the 3D model was created and textured, I then rigged the model using 3D Studio Max’s bone tools, and then animated the model. 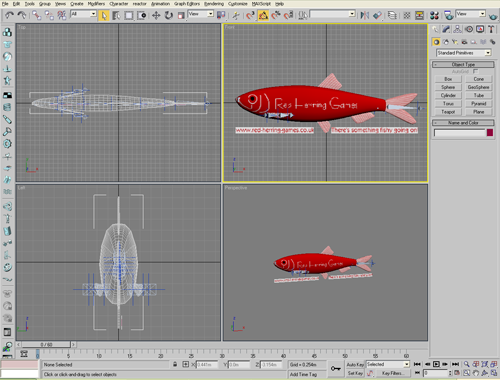 My first attempt at the animated logo is below:

After receiving feedback from the company, I had a second attempt at making the fish look like it is swimming correctly:

In the end the company decided not to use this logo.

I am a fan of a lot of different science-fiction series, so I decided to create a 3D model of the Starfury fighter from Babylon 5.  This was just for my own use and as a way to practice my 3D modelling skills. 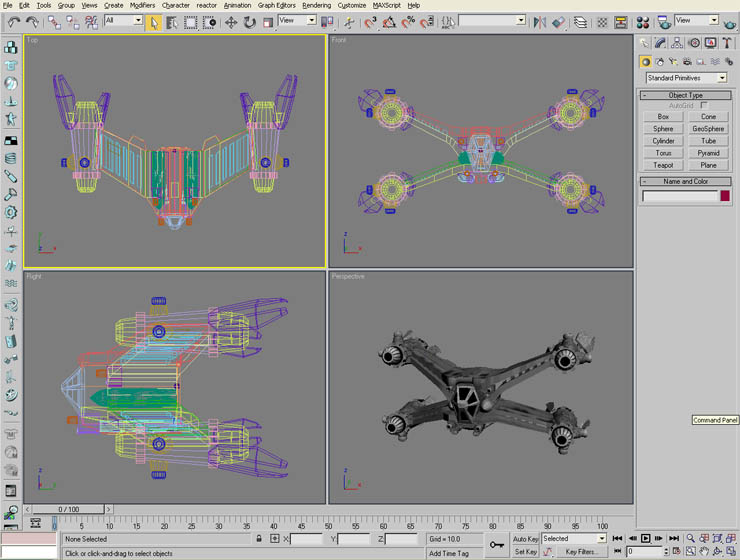 To make the model, I first found images of the Starfury from different angles, mainly the front, side and top, and then used these as a template to make the model.  As you can see from the image above, the model consists of a number of different section, each with their own colour to make it easier to see.

I have also included a render of the 3D model, which can be viewed here, and the below video, to show the model from different angles:

3D MODELS FOR USE IN A COMPUTER GAME MOD

For my dissertation at University I created a computer game modification for Star Trek: Armada 2, based on the universe from the Halo Xbox games.  As part of this I made and textured 3D models of different space ships and stations from Halo, for use in the mod.

Recently, I have been spending some of my free time redoing the 3D models for the mod, and expanding on the work I did for my dissertation. 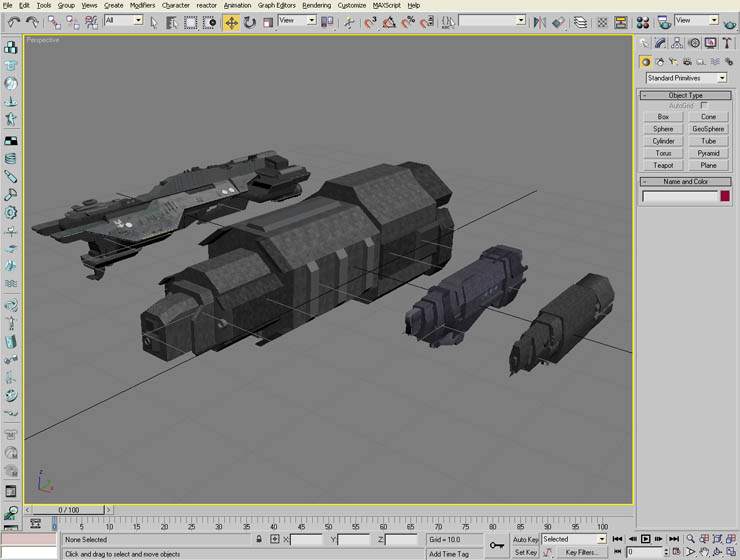 Above is picture of some of the models I created and textured for the game mod.  The textures were all made using Adobe Photoshop, and I largely based them on parts of textures that come with 3D Studio Max, but with some extra parts I either made myself or took from screenshots of the specific ship.

You can view more screenshots and renders of the examples that I have included, here.